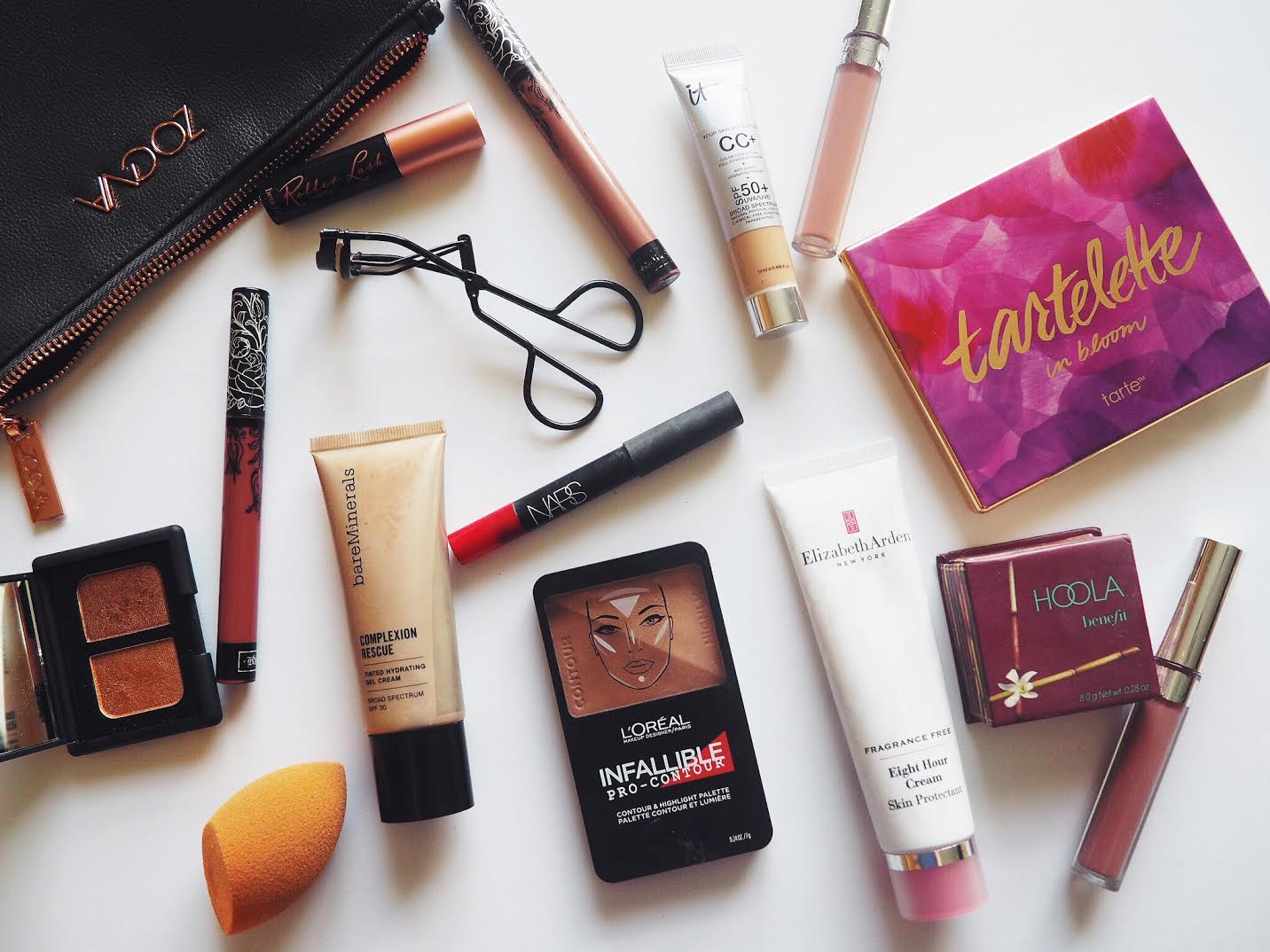 I definitely like to switch things up in the beauty department seeing as I wouldn’t deny the fact that I’m a bit of a beauty junkie. In an effort to not use the same things over and over again, I make it a point to try new products I’ve been hearing about or rotate a few bits from my beauty stash that haven’t received any love lately. Despite my best efforts, I often do wind up reaching for the same foundation, liquid lipstick or eyeshadow palette that I’ve been using on a regular basis for the past few months. Right now my makeup bag is filled with a few tidbits I’ve been alternating between since the beginning of summer. Think glowy CC cream, bronze eyeshadow and a drugstore contour and highlight palette I’m a big fan of. On the plus side, getting ready in the morning has become a more streamlined process since everything I need is in one bag. And I’m all about keeping things quick and easy during the summer anyway. Curious to know what’s inside?

FACE
Recently, I picked up the IT Cosmetics Travel Size Your Skin But Better CC Cream with SPF +50 to see if I’d like it just as much as everyone else does. I figured going with the travel size version was the safe option seeing as the normal size is a bit pricey and well, what if I didn’t like it as much as everyone else? Turns out I’m definitely not in the minority with this one. Surprised I’m saying this, but I think I might just like it a smidgen more than the Bare Minerals Complexion Rescue Tinted Hydrating Gel Cream, which was a staple of mine last summer. I’ve been alternating between those two in terms of foundation because I only like light to medium coverage on my face during the summer. A new addition to my makeup bag is the L’Oréal Infallible Pro Contour Palette, which is a perfect no fuss contour/highlight duo that’s small and compact for traveling. I love the professionally defined look this product gives my features and the best part is how affordable it is. Lastly, my Benefit Hoola Bronzer goes just about everywhere with me. I don’t see that changing anytime soon.

EYES
There’s not much going on around here that’s new except for the NARS Isolde Duo Eyeshadow, which I’ve been loving wearing recently. Apart from that, I’ve gone back to a palette that I bought this past winter because I knew I’d get a ton of wearability out of the shades. It’s the Tarte Tartlette In Bloom Clay Eyeshadow Palette, which I’ve mentioned numerous times on here. I’ve only started wearing a certain shade recently called rocker that rocks my world. No pun intended, ha. It’s a gorgeous shimmery taupe shade that I’ve been using by itself all over my lid during the week for work. It’s managed to make me stray away from funny girl and firecracker- two shades that I’m a bit obsessed with. On the mascara front, I’ve gone back to using the travel size version of an oldie but goodie – Benefit Roller Lash. My eyelashes are quite straight and this mascara does a great job of curling them even without the use of my eyelash curler, which I’m practically glued to.

LIPS
I’m still all about liquid lipsticks and haven’t used an actual lipstick in several weeks I’d say. My favorite combo at the moment is pairing two Kat Von D Everlasting Liquid Lipstick shades together- Lolita and Bow N Arrow. I put a light, even layer of Lolita on my lips and then top it off with Bow N Arrow. Those two combined create probably the best shade I’ve ever worn. Other than those two, I’ve also been alternating between two different ColourPop shades- Midi and Trap. Safe to say I’ve been on a bit of a nude/brown train lately. Occasionally, I do really enjoy wearing a red/orange shade like NARS Dragon Girl Velvet Matte Lip Pencil, which is a perfect summery red shade. I’ve also been keeping my lips super moisturized by using the coveted Elizabeth Arden Eight Hour Cream before bed about 3-4 times a week. And that’s all folks.